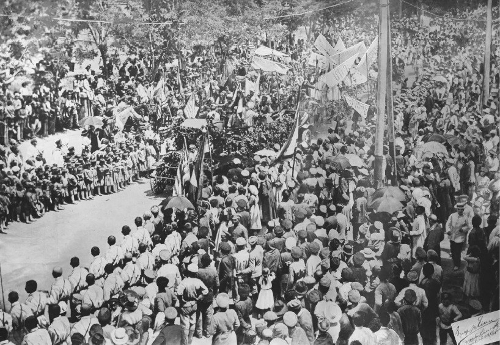 “1919 May 28, Yerevan, Independence Day parade starting from Abovyan street, towards the Armenian Republic’s Parliament building, headed by a woman dressed in black, symbolizing the bloody past of Armenia, and behind her is a woman dressed in white, symbolizing the present day Armenia, the newly-independent Armenia. In their front, two men from Western Armenian and from Eastern Armenia are walking hand-in-hand, symbolizing the Unity of the Armenian Nation. The first and second automobiles are surrounded by men holding posters of the newly liberated Armenian Provinces (Moush, Sasoun, Dikranakerd, Sis etc.). On either side of the parade, we can see the refugees, the orphans and the Armenian military. Indeed, a very touching scene is immortalized.”