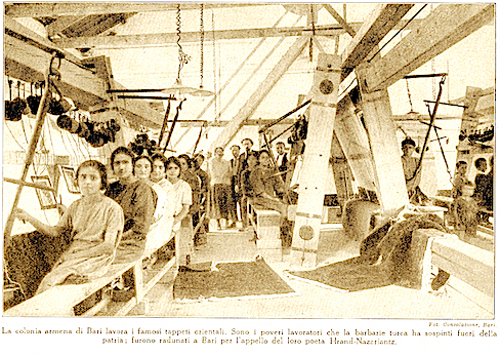 Between 1924 and 1927 poet Hrand Nazariantz called in Bari (southern Italy) some Armenian families who were in the camps of the Red Cross in Greece. Most of them had arrived in Greece after the fire of Smyrna (1922). Often in these families there were only women, mothers, sisters and daughters.

With the help of many friends and Italian politicians, Nazariantz managed to turn a mill in a factory of oriental carpets to provide jobs for these people. The economic crisis of the 1930’s and the Second World War dictated the negative outcome of the project.

Now in Bari there is still a small part of the Armenian village which was called “Nor Arax” and was officially founded in 1926.