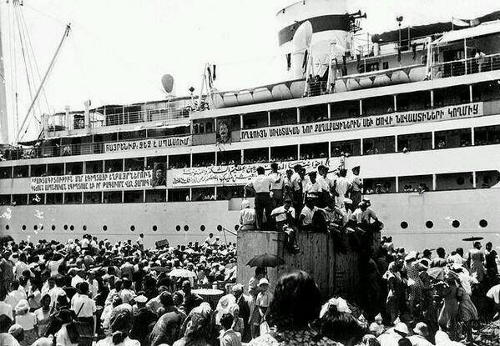 “The Russian ship “Pobeda” docked at the Alexandria, Egypt harbour to transport Armenian immigrants to Armenia in 1947. There were First and Second caravans carrying Armenians wishing to return back to the Fatherland. The banner on the ship is written in Armenian and Russian and Arabic. It says “The Fatherland is waiting for you. Greetings to the new citizens of Soviet Armenia from the Black Sea sailors. Gratitude to our Egyptian brothers. Long live Eternal Egypt and its King Farouk”

At the time the population of Armenia was less than 1 million and Stalin wanted to form the new Soviet Union with its republics. The condition to be counted as a republic was to have more than 1 million population, otherwise Armenia would have been a Territory only. That’s why the Soviet Armenia asked the Diaspora Armenians to return to Fatherland and raise their numbers to more than a million. Hundred of thousands Armenians went back to Armenia, including my relatives and we were able to be declared a Soviet Republic instead of a soviet territory. this was in 1946-1947 period.”