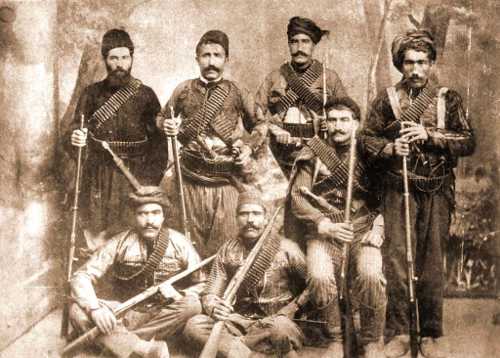 Serope Aghpure Pasha’s Armenian Fedayee squad in Mush in 1899. Serophe Aghpure Pasha was one of the most valiant, self-sacrificing Armenian freedom fighters of all time and was fondly referred to as “The Guardian of the Armenians of Mush and Sassoun”; he was a member of the Armenian Revolutionary Federation of Sassoun. This photo has members of his Fedayi Squad including the legendary “Arütz Avo”.

Fedayeen were Armenian civilians who formed self-defense groups in reaction to the mass murder of Armenians (1894-1896) during the reign of the Ottoman Sultan Abdul Hamid II.